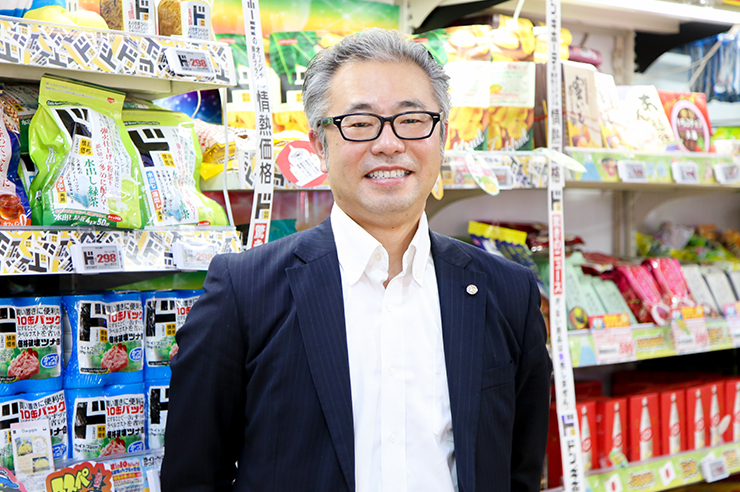 Ken Sakakibara serves as Co-Chief Merchandising Officer(Co-CMO), and Senior Executive Officer for the Company. During his school years, he did not take the traditional job-hunting path common to Japanese new graduates due to his dedication to his part-time work. Instead, he looked for full-time employment in magazines designed for job-seekers. As he perused various potential employers, one caught his eye - Don Quijote. He decided to apply for a position, lured by the promise that he could freely purchase as much as 100 million yen of product (a result of the Don Quijote art of delegating authority). Though he did apply to other listings, Don Quijote was the first to provide him an offer, which he took - he would then join the company in 1997, becoming a member of the inaugural staff for the Shinjuku location. After training at what was at that time the Fuchu location, he handled product management at the Shinjuku and Setagaya locations. However, when the General Manager at that time of the Sales Headquarters made a site visit to his store, he seized the opportunity to directly appeal to the GM, pitching that he be transferred to the Sales Department, the Don Quijote front lines. His passion was rewarded with a transfer to the Shinjuku location's 3MD (consumables). In 2013, he became an Executive Officer at Don Quijote Co., Ltd., after experience serving in the Store Manager, Block Manager, and Category Leader positions. In 2017, after serving as General Manager of Don Quijote Co., Ltd.'s Lifestyle Merchandising Development Division, he became Director of the Company. Currently, his primary charge is the entire set of product departments ( merchandising development, inventory management) within the Group's retail department. He jointly serves as Director of Don Quijote Co., Ltd. Today, he strives to fulfill his role as domestic Chief Merchandising Officer.
Mr. Sakakibara is constantly mindful of maintaining fair trade with partners. He is also inclusive of those with entirely disparate perspectives and ways of thinking than his, continuously broadening his horizons. Further, he takes the stance that there is no such thing as an unsellable product, indefatigable in his thoughtfulness toward the products he deals in - even if it takes a full day to think through sales copy for a product, for example.
According to him, "With ever-expanding scope and business styles come endless challenges, and it is key to broadly invite new ideas from people regardless of rank or responsibility, conducting a continuous cycle of action and verification."

His favorite excerpt from "The Source" ("Genryu") is in Precept 1 of The Six Precepts of Our Management Philosophy. There, it says that We commit ourselves to doing business in a manner that is unselfish, 100% honest, and grounded in a strong sense of morality and purpose. Others come from 10-5 of Ten Precepts Relating to Employee Mindset and Conduct: Make others the subject of the sentence so you can talk from their perspective.

Born in Hyogo prefecture in 1971.
back