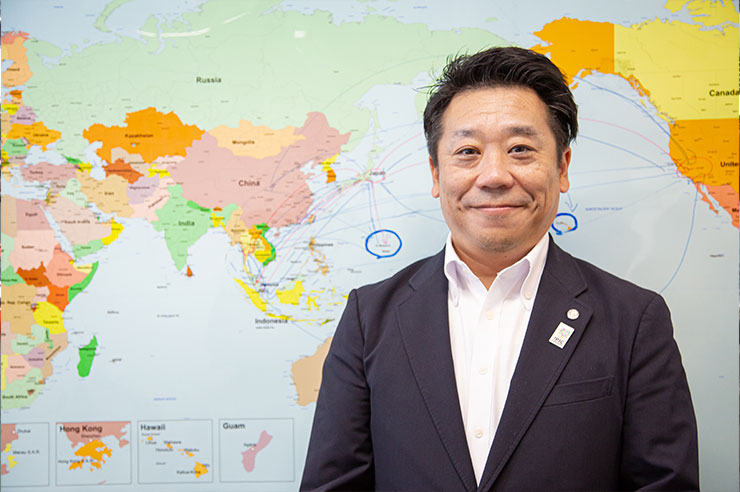 Chief Merchandising Officer (Global), Vice President of Asia Company and Director and Senior Managing Executive Officer Kazuhiro Matsumoto joined us as a mate (part-time employee) in 1995 for the opening of the Kisarazu Don Quijote location. He was promoted to full-time employee status the following year, and in 1997, he left the company to take on the challenge of founding his own business. Half a year of trial and error led to frustration for Mr. Matsumoto, who then, reflecting on his own need for improvement, rejoined the company after half a year.
Since then he has been active in a number of field locations: as store manager of the Makuhari, Roppongi, and PAW Kita-ikebukuro stores, and as Branch General Manager of the Metropolitan, Keiyo, and Saikyo Area branch offices. In 2007, he took the role of Category Leader of the No. 3 Business Unit (Consumables).
In 2015, he served as director for a number of Group companies: Don Quijote Holdings Retail Management Co., Ltd., Lirack Co., Ltd., and Justneo Co., Ltd. (currently Pan Pacific International Trading Co., Ltd.). In 2017, he became General Manager of Food and Liquor Merchandising Development Headquarters, and then Executive Officer of the Company in 2018.
As merchandising development officer, he has been engaged with negotiations overseas and seen the world-wide distribution network of products. Building passion for overseas businesses, he directly appealed to the company representative at the time. Since 2019, he has been in charge of overseas business as Director, Managing Executive Officer, and Chief Merchandising Officer (Global). In 2020, he was also appointed as Vice President of Asia Company.
Going forward, he aims to improve three key facets - human resources development capabilities, product supply capabilities, and profitability - by using our overseas corporations as growth engines for the PPIH Group.

Born in Chiba prefecture in 1973.
back